Welcome to my art blog!

You are also invited to check out my website: www.liedekebulderart.com and the site of my Kauai gallery: www.hashisfineart.com

My garden here on the garden island of Kauai, has been a true sanctuary and inspiration for me especially during these times of Covid-19.

Being born and raised in The Netherlands, gardening and flowers are in my blood.  My first job as a young girl was in a nursery transplanting little seedlings.    And as an artist, I continue to be drawn back to painting flowers.    They are such metaphors for life and death.  They bring solace and joy.   “Earth laughs through flowers”, said Ralph Waldo Emerson.    “Zeg het met bloemen”, say the Dutch, which translates to “say it through flowers”…

This year, the Dutch tulip farmers have had to destroy or plow under their endless fields of bulbs because of the lack of trade.   Even the world’s most photographed Keukenhof gardens were closed to visitors this year and only visible digitally.

Not so in my Kauai garden!   Years ago, by chance, I found a blue jade vine at the local Home Depot.   And, to my amazement it took off and loved its spot in my backyard!

Strongylodon macrobotys, more commonly known as the jade vine, originates in The Phillippines.  It grows from a woody trunk and its vines can grow as long as 18 meters or more.  Needless to say, it keeps me pruning so as not to overtake everything else.   However, the vine is not invasive!    The flowers are an amazing turquoise to emerald to mint green, therefore the name:  Blue Jade.

Take a look at my latest Blue Jade painting!

We are living in historic times indeed.   For many of us our lives have been turned upside down in all kinds of ways.  One way for sure is that it has brought many of us to pause and reflect on what was, what has changed and what the future may look like.    Letting ourselves get too caught up in this obsessive spinning of thoughts is a bleak road to nowhere.

I thought that it might be a nice thing to share with you, in an affordable way,  some art I created that comes from a different and quiet place: 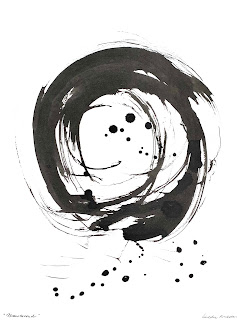 The piece Nanosecond  was created after an intense week of study with Zen Calligraphy Master Kazuaki Tanahashi.   It is the Japanese enso circle, symbolizing the moment.  The moment where we have everything we need right within us….   It is painted in deep silence and with total focus. 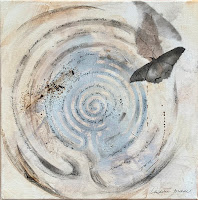 This piece  “Turn, Turn, Turn”  was inspired by the labyrinth and the Ecclesiastes text (also known as the Pete Seeger song).  Labyrinths were created in early times for seekers who were not able to go and embark on far away pilgrimages.   Instead we find them at churches, such as Chartres Cathedral in France and Grace Cathedral in San Francisco.  What beautiful metaphors for our human journeys!    The black moths in Hawaiian mythology are messengers from Beyond… They put our hearts at peace with assurances that our loved ones, who have gone before, are all right….

Both of these pieces are available in a special edition of 50 archival prints in their original sizes, 24" x 16" on paper, and 12" x 12" either on canvas or paper respectively.  Contact the artist or Hashi's Fine Art Gallery for more details.

In any event, I hope these pieces may bring you solace  and/or be a focus for reflection or centering yourself in the time of Covid-19.

May Peace be with you! 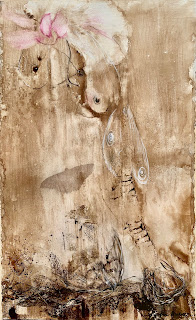 Just wanted to share one of my latest mixed media drawings with you.   I had such fun creating this piece.  It is part of my exhibition "Roots to Wings"  on view at Hashi's Fine Art Gallery in historic Hanapepe town on Kauai through Friday, January 31, 2020.

As always there is some general idea of what I want to express but the fun comes when I prepare the sheet of archival paper or canvas with a wash of bistre, a pigment made from the soot of burned walnut shells.

Paying close attention to the process, the work begins.... I see a line, a shape or form  and  I add to the piece using different drawing and mark making techniques to tell the story.


Weave your own story as the viewer:   the movement or "current" is upward....
Earthbound, airborne....
Posted by Liedeke Bulder at 4:38 PM 0 comments 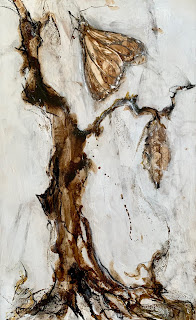 How serendipitous it is for an artist to receive the gift of "full circle" for his or her work.  This happened to me a week ago when I was doing my turn of 'sitting' the gallery and this very alive woman, about my age, I think, walks in and is really touched by my work.    She was a collector from the San Francisco Bay area and we made an instant connection on different levels... Not only did she "get" the work but was moved by it to the point of making a purchase of the last drawing I had finished for this new show "Roots to Wings".

The piece, like most of my art work, tells a story about the cycle of life and transformation.   Here expressed with the movement from earth and darkness and roots to air, light and wings.  From cocoon to butterfly.... not an easy, painless journey....

I felt the joy and reward of experiencing my creative gifts "gone full circle". 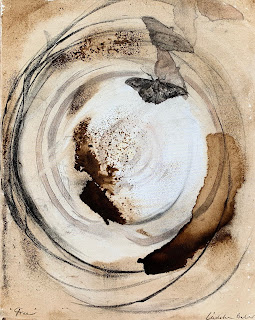 A new decade!  A new normal and some of it expressed in a showing of new work, my first solo feature show in almost a decade...

This last decade was a tough one:  I walked the Lewy Body Dementia journey with my husband of almost 30 years and stopped really being in the creative flow for a while.... But I am back!!!

The above piece is called FREE.  Inspired by several things; meditative labyrinth walks,  the cycle of life, the breaking of the bonds of suffering,  the Hawaiian witch moth (ascalapha odorata) purported to appear after the death of a loved one to ???  And that is indeed how it happened in our case!

You can see this work during the month of January at www.HashisFineArtGallery.com
I will be at the gallery on Thursdays 12-4;30 pm or email me for more info. 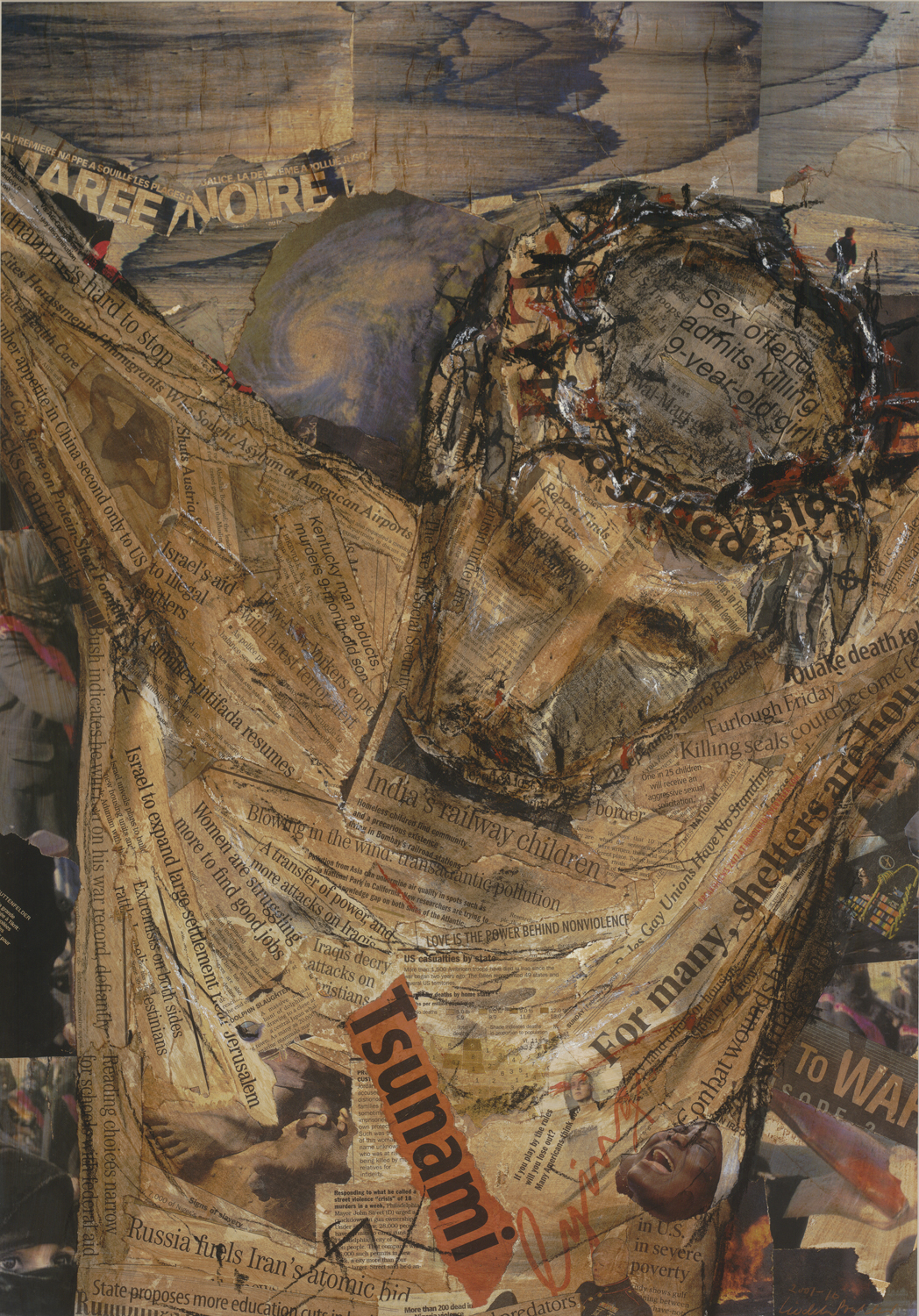 I am battling the tail end of a cold virus that has lingered for weeks.  The good thing is that it has allowed me lots of down time and time to play with my website and even attempt to write a blog for the first time in about a year...

I created the above piece over a period of 7 years.  I started it at the beginning of the Iraq war.  We were living in a community were most folks were very pro war.  So this was a way to process and deal with my own feelings.  I would collect the newspaper pieces and put them into a file then pull them out as the Spirit called me through the years to work more on this.

As you look at the bits, you can see a photograph of a 'mended' veteran's face, Abu Graib, a grieving woman dating back to the Haiti earthquake, and on and on.  As I finished the piece when our troops left Iraq in 2010, I became aware that what had started as an outlet to process the beginning of the Iraq war, over the years evolved into a statement about our human condition.

I do not know how the quote "Love is the power behind non violence" ended up right at the place where the human heart would be in the crucifix figure...  "Ecce Homo".

May this week be a profound time for Christian, Jew and all of us searching for Divine Mystery. 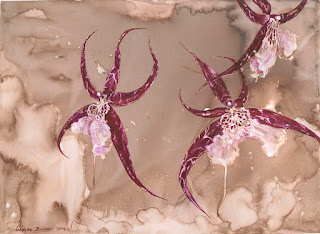 Almost spring on Kauai. Winter winds and rain are still pounding our rock in the middle of the grand South Pacific but soon it will be time for the annual spring orchid show. This feast for the eyes is put on by the Garden Island Orchid Society  at the United Church of Christ in Hanapepe, Kauai.

I am pleased to have been invited to share an art booth with the society's resident photographer Ada Koene.   Ada will be selling her magnificent orchid photography.  I will be offering cards and prints of my Orchid series especially created for this occasion. It will be a great opportunity for you to purchase images of my work at very affordable prices.

In addition to the show, there will be orchid plants for sale, and, of course, great food!  Part of the proceeds from all sales go to support the programs of the Garden Island Orchid Society.

There will be an Orchid Doctor, Dennis Olivas, on duty on Friday the 30th at 1:00 and 4:00 p.m.  Bring your sick plants!! There will be no charge for this service.

May the weather gods cooperate and bring us dry and sunny weather by then!

Liedeke Bulder
I love living on old volcano soil in the middle of the vastest ocean expanse, yet feel connected with that whole world out there...

Get My Updates By Email